Full of golden tones and pampas, we love this Moroccan styled shoot. 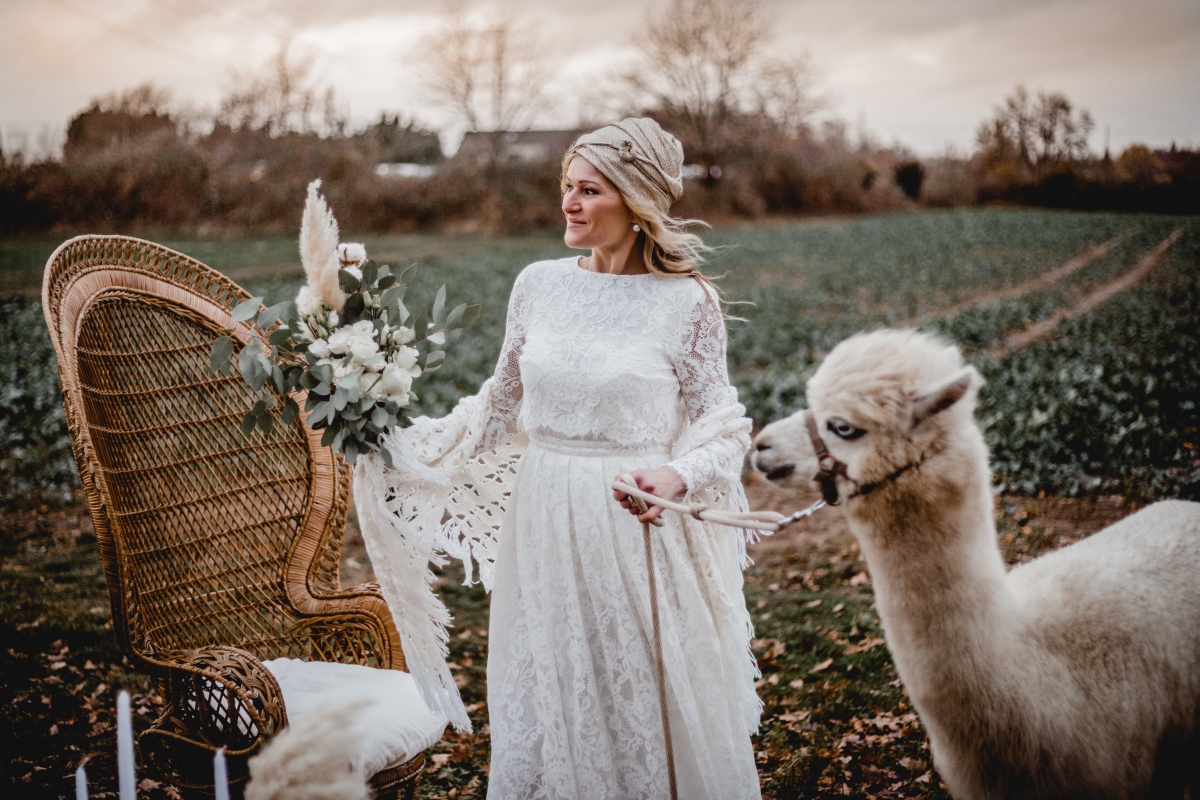 As the weather starts to turn milder, and the days grow longer, we’re looking ahead too summer…which is why we are all about this warming shoot submitted by photographer, Isabel Pogscheba.

Full of golden tones, pampas and simple styling, there is also a surprise guest in the form of a gorgeous, white alpaca. Speaking to Isabel, we learnt that her idea was to create a bridal styled shoot in a rustic, moroccan, festival style…and the suppliers she pulled together certainly nailed the concept!

It’s beautifully neutral, and has oodles of character… 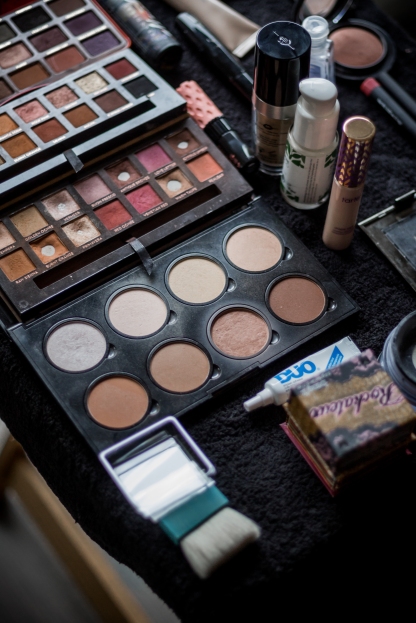 Bathed in golden light, despite the weather on the day being dreary and damp, the team brought to life a little corner of the field which is the alpaca’s home with gorgeous, vintage wicker furniture, brass vases and candlesticks, and bang on-trend pouffes.

We especially love the cake with the stalks of florals, pampas and feathers sticking upright out of the centre…such a unique and modern way to style a buttercream cake! 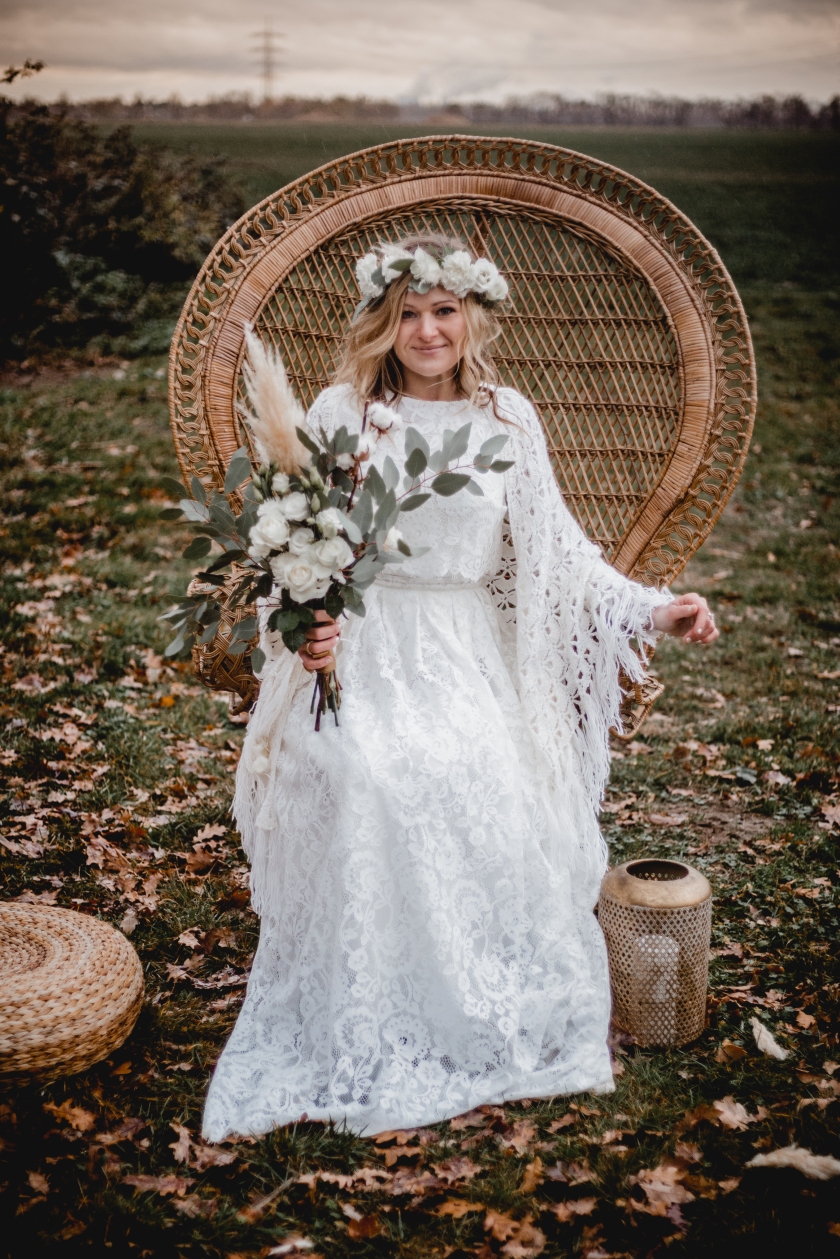 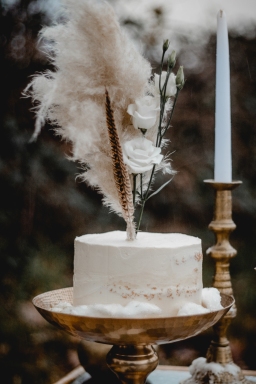 The bridal style overflowed with lace…with a lace skirt and top, and a gorgeous shawl to drape over the models shoulders. Opting to go without jewellery, the team decided to up-style her gown with a beautiful floral crown handmade with white roses and eucalyptus, and a stunning bridal turban in gold, shimmery tones.

We love the different take on the boho style…natural, effortless and free-flowing, with fresh-faced bridal beauty. 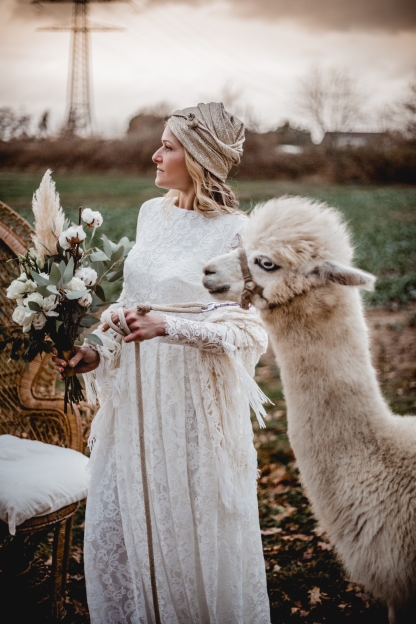 TOP TIP: Vintage wicker and rattan furniture is such a massive trend this year…so if you are a stylist, snap it up on eBay/pre-loved websites or at bootsales/vintage fairs while you can, as new-age replicas are really expensive! Also, buying pre-loved items is much more eco-friendly!

Think chairs, end tables, coffee tables and even day-beds which can be used for sweetheart tables and chill out areas. 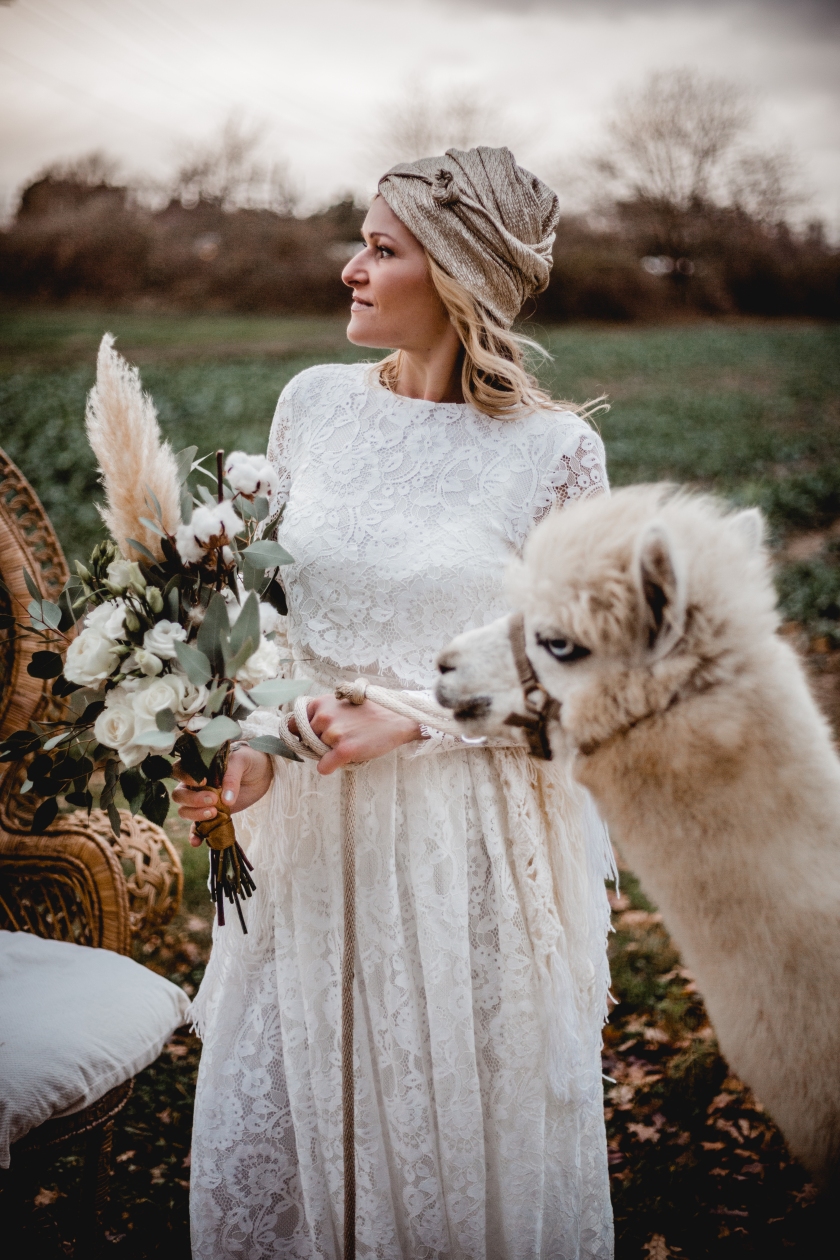 When this delicious shoot landed in our inbox, we knew we had to share it with the world. It’s wild, romantic and, well…wild some more! From the flowing dresses, to the abundant flowers, the whole shoot is a perfect juxtaposition between the rugged landscape and the soft, romanticism of the bridal styling. And when something is shot so authentically, it’s hard not to fall in love hard. We could feel the emotion behind the camera and photographer, Elena Popa, tells us more…

“Dorset – and in particular Lulworth cove and the Jurassic Coast – has for a long while held a special place in my heart. Many happy memories stem from this corner of the world, not to mention I am a total sucker for a dramatic coastline, so naturally the day arrived when I decided I just had to shoot there. I’d already sourced a couple of dresses should the occasion arise – and I wanted to keep it quick and simple, so I contacted wonderful model Holly Drinkwater and super talented flower queen Elspeth Louise Flowers who were kind enough to say yes to this adventure.” 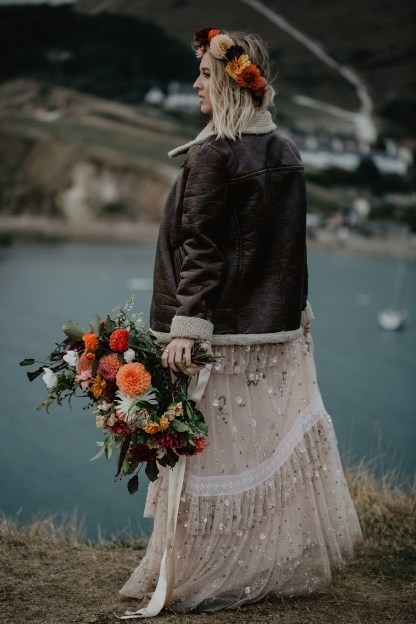 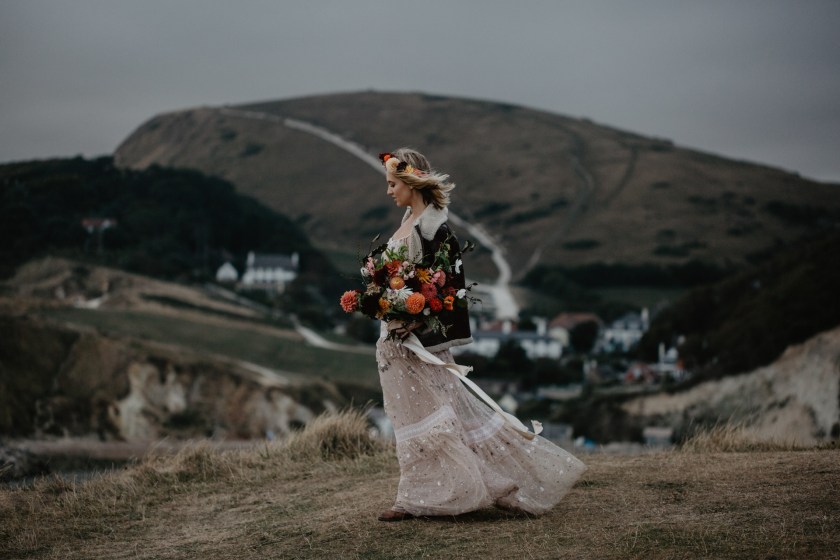 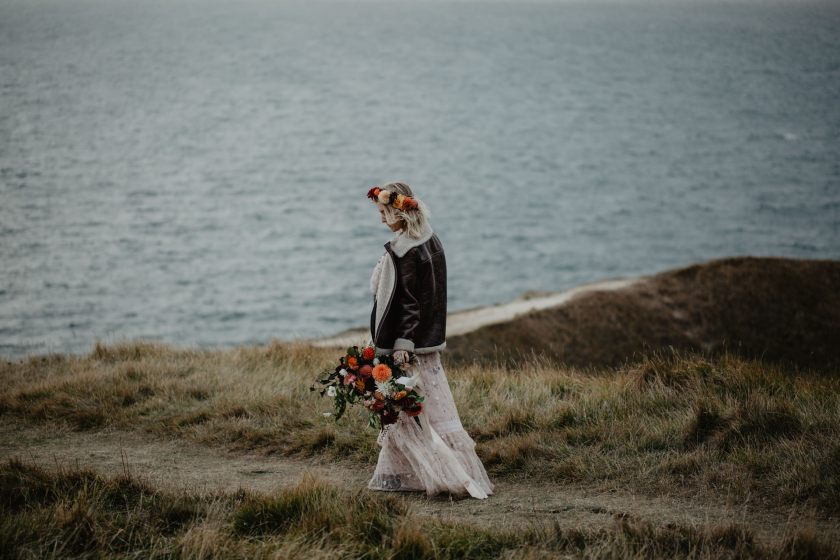 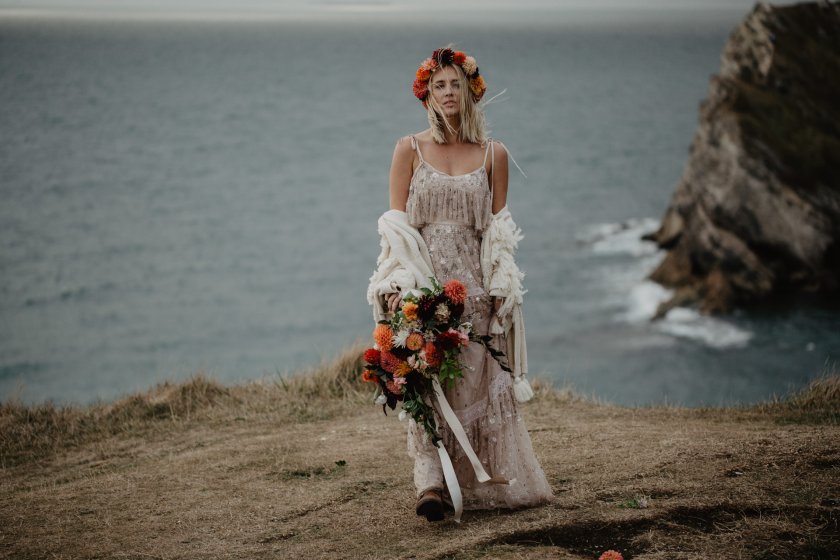 Elena’s concept incorporated both her love for the location and her desire for adventurous weddings and elopements to become more of a thing in the UK.

“There’s nothing quite like tying the knot in the midst of an epic landscape like this and I wish UK laws could accommodate this for those who wish to marry in the wild.”

Elena chose two dresses in completely different styles. One, a simple white wrap dress from Asos – the neckline and sleeve combination being incredibly flattering. The other dress was the ethereal dusty pink Supernova gown from Needle and Thread. The look was complemented with a boho white tassel throw, brown shearling jacket and boots. 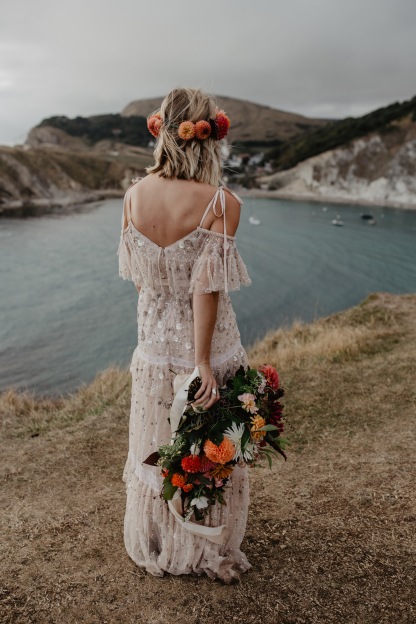 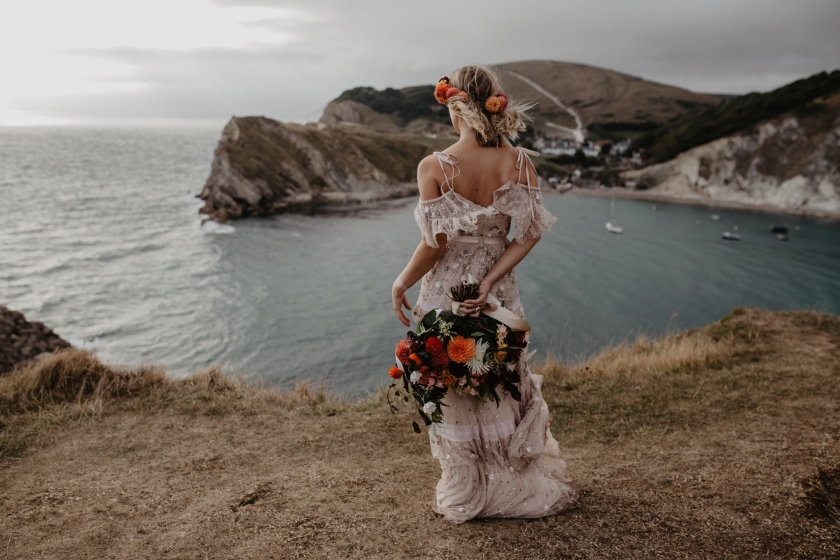 We are complete suckers for abundant bouquets, and Elena is of the same mind…

“Oversize bouquets are the way to go and Elspeth truly outdid herself with this one – all the while using flowers that were still in season. I absolutely love the flower crown she created, in keeping with the autumnal vibes I was trying to incorporate in the shoot.” 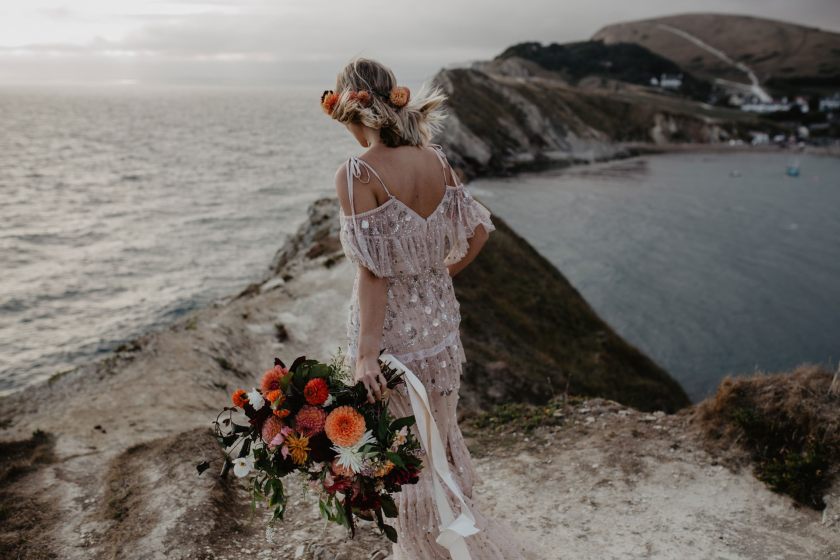 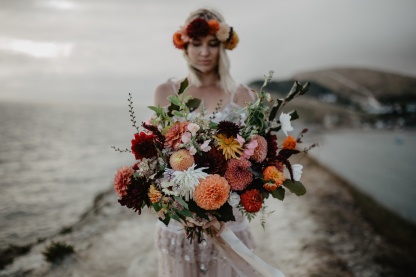 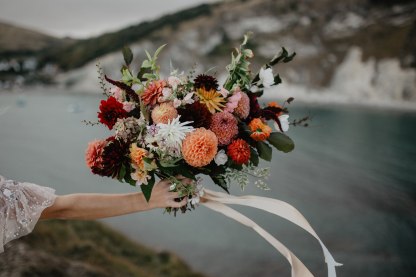 Of course, the biggest concern with the shoot was the unpredictable British weather; but Elena explains that Holly (the model) was such a trooper during the shoot! The wind was fierce but the team spent a good couple of hours shooting on the breathtaking clifftops surrounding Lulworth Cove, before returning to their cars for warmth. The flowers held together remarkably well in the windy conditions too – Elspeth, the florist, must have put them together with magic! 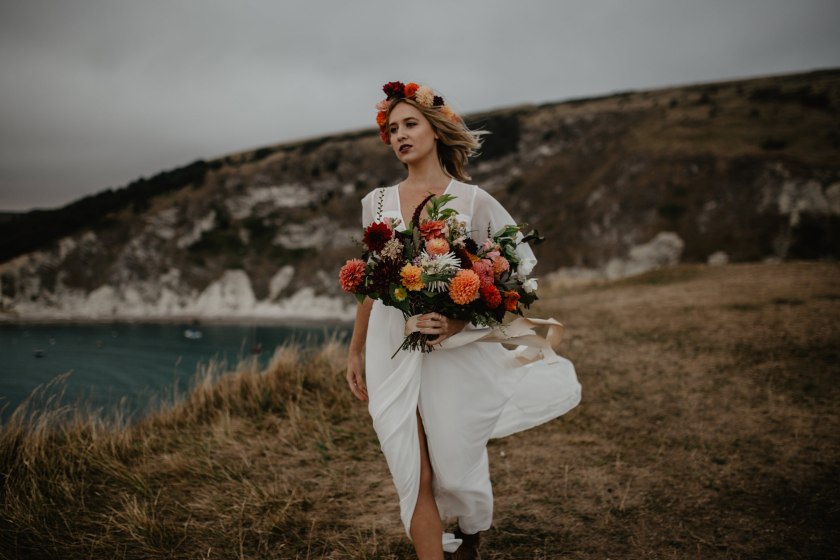 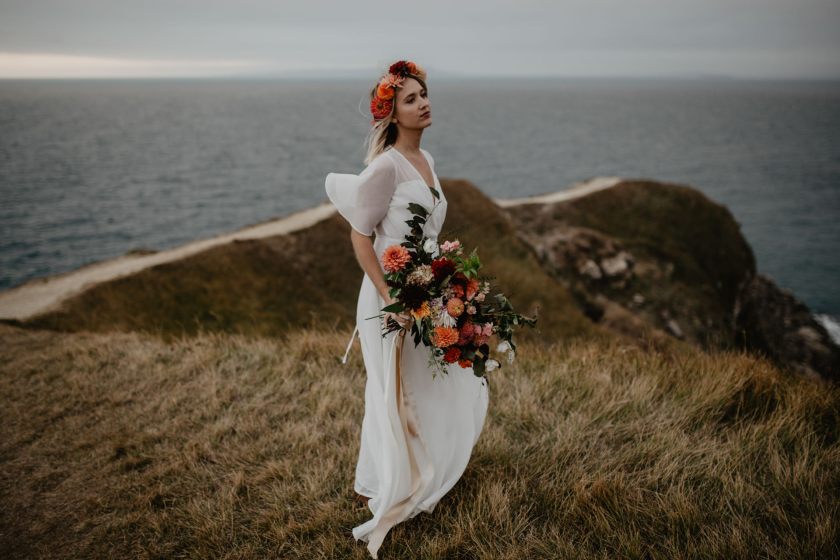 We asked Elena, what her favourite aspect of the shoot was…

And we completely agree Elena…you and your team smashed it!

Dresses | Needle and Thread and ASOS